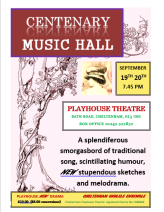 Playhouse New Drama’s Second production was a fund-raiser for the Cheltenham Playhouse Theatre.
Our great community theatre, The Cheltenham Playhouse, staged our fund-raiser Music Hall on September 19th and 20th, 2014. The event raised over £1,000 for the theatre. It combines sing-along songs from the height of music hall a hundred years ago, with new writing in a traditional  vein from Playhouse New Drama. Following a music-hall custom of the time, we have a string band accompaniment from the Cheltenham Ukulele Ensemble.  Another 1914 custom — selling alcohol inside the auditorium — was banned by law after the Great War, and that ban sadly remains to this day. However, the Playhouse does have two excellent bars for pre-show, interval, and post-show refreshment.

This is the second annual production of Playhouse New Drama, a cooperative of local writers and actors who create new drama for the stage. As several centenary items were written by PND members this year, a Music Hall was the ideal way of presenting the new sketches and melodrama in a major entertainment event with plenty of audience participation. The PND writers contributing to the production are Annie Ellis, Min Lacey, Marilyn Timms and Howard Timms. The artistic director is Min Lacey, and deviser/producer Howard Timms.

PND’s regular creative meetings are held in the Green Room Bar of the Playhouse Theatre, Bath Road, Cheltenham, usually on a Tuesday. It’s focus is on helping playwrights to develop their art and achieve performance of their scripts through hearing actors read them. The main activity is reading new scripts in development in regular table readings, leading to several script-in-hand performances and one production each year.