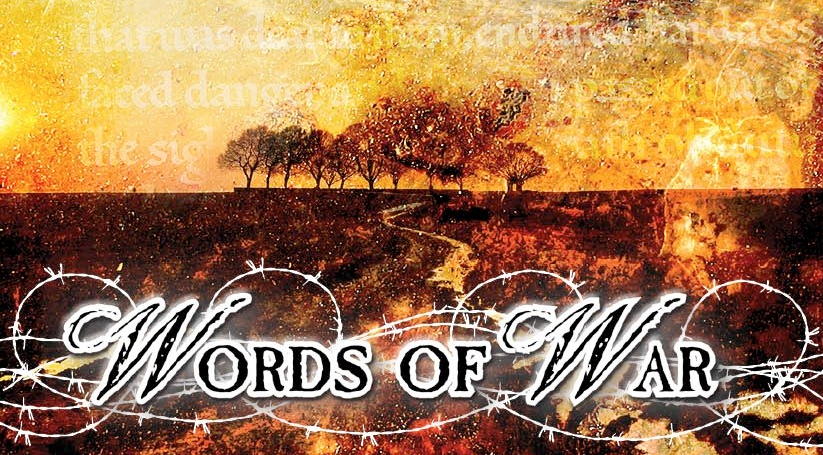 World War One was supposed to be the war to end all wars. . . As four Cheltenham soldiers struggle to survive this turbulent time, they are further troubled by rifts and rivalries between them.   At the centre of their differences, Kath, a doctor’s daughter, nurse, and suffragette. As a grandmother, Kath looks back and shows and tells her suitors’ stories through flashbacks and letters.

Playwright’s Note. My heartfelt thanks to Deep End Company for inviting me to lead the devising process and write this play. Min Lacey, member of Playhouse New Drama and Deep End, instigated the collaboration between the two Playhouse resident companies. All of the above have made significant contributions in ideas, themes, character development, and drafting dialogue. Anja, Lloyd, Marilyn, Mary, and Neil made particularly strong and time-consuming contributions, in addition to their directing or acting roles. The plot and characterization is largely mine, and any remaining blemishes, omissions, or errors are entirely mine.

World War One was supposed to be the war to end all wars. . . As four Cheltenham soldiers struggle to survive this turbulent time, they are further troubled by rifts and rivalries between them.   At the centre of their differences, Kath, a doctor’s daughter, nurse, and suffragette. Through letters and flashbacks, Kath shows and tells her suitors’ stories.

Reviews of Words of War

Eve Seymour, Cheltenham Standard     October 30, 2014
. . . . this is a story about the human cost of war and how the consequences of conflict and loss echo down the generations. . . the audience is intimately involved in the action, whether it’s at home as bad news is delivered, or on the battlefield. . . By making full use of the auditorium, the ‘going over the top’ scene at the end of the first half is compelling, gut wrenching, and moving. . . the final scene at the war memorial has haunting words for us all: ‘Remember me’. It’s a fitting tribute with which to close this well-written and poignant play.

Anna Saunders, Executive Director, Cheltenham Poetry Festival  CIC     October 31, 2014
Stories passed through the generations were the starting point for a play which ran at the Playhouse this month. Words of War is inspired by the tales told to playwright Howard Timms by his grandmother, and the play gives voice to the years of conflict.The narrative is lead by ‘Kath’ who is looking back on her life and a war which has taken a husband, and his cherished comrades, from her.  The widowed Kath remains on stage throughout, as a minimalist, but effective set is wheeled on and off.The special effects are dramatic and atmospheric, and the stage craft is inventive: the audience is thrown into the thick of it – the cast move through the stalls carrying the wounded, and the trenches are built in the orchestra pit.It’s not just on the battle ground that the suffering occurs and Timms’ sensitive, nuanced and drama-filled script takes us into the homes, and the hearts, of those affected by war. It’s refreshing to see a play which focuses not just on the front line, but on the lives of those who are left behind, and an excellent cast do justice to these ‘words of war’.Marilyn Timms as the grieving mother was heart rending, as was her daughter Elizabeth (Gwenefer Roskilly – a actress of great versatility). A vulnerability behind a very British ‘stiff-upper lip’ was suggested by Cliff Cocks as Archibald Barratt.William Chalmers, portrayed convincingly the transition from dashing young suitor to the soldier, ‘broken in mind and body.’ Also of note was Neil Webber as the brooding, self-reflective Albert, and Frank ( Adam Wright ) whose eloquent delivery allowed us to believe he was ‘ the finest man’ his comrades had seen.  Mary Peterson offered an assured and naturalistic performance (as the young Kath) as did Rob Barton – Ancliffe as Edward, desperate to sign up, but unable to cope with life after seeing action.In the final scene the cast gather around a war memory and we hear a chorus exhorting us to remember those who fell. And this memorable production acts as a worthy elegy to some of Gloucestershire’s casualties of war.